Isaac Hamilton, better known as IceManIsaac, is very deliberate. Everything he does has a purpose. So, when he decided to make a real go of content creation and streaming, he knew he needed a genuine content strategy. What he came up with has served him well to this very day: It’s not about him.

Rather than post gameplay about himself, IceManIsaac posted guides on how to help others get better. And it worked. His commitment to his community spawned Warzone Academy, helped him blow up on YouTube, and turned him into a household name. But this is just the beginning. 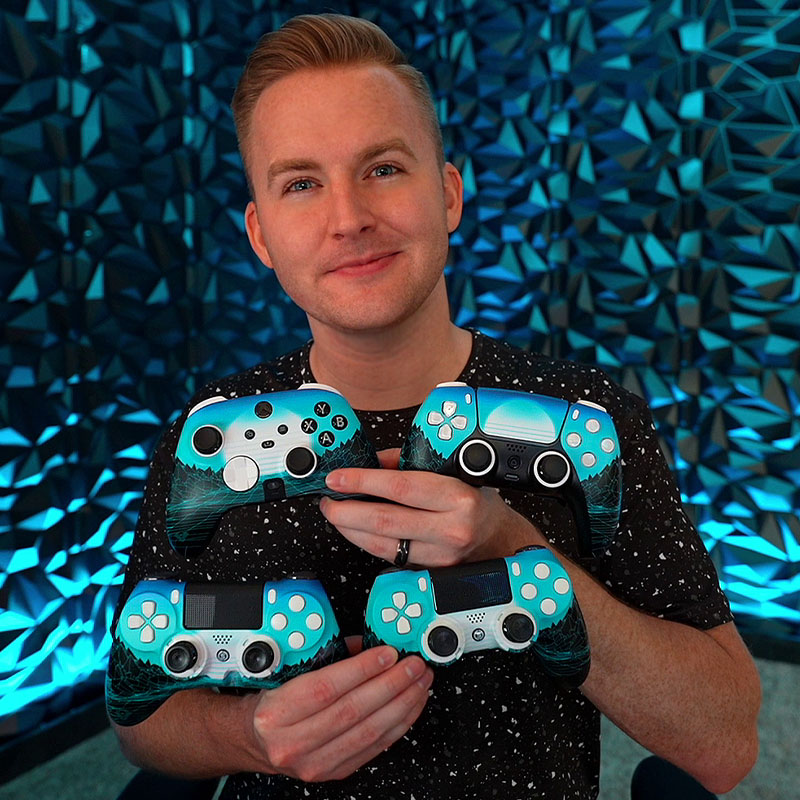 We caught up with IceManIsaac as he prepares to release his first custom SCUF controller to learn more about how he started, what inspired his controller design, and what the future holds.

What was your first introduction to gaming? What game first got you hooked?

I’ve been gaming for as long as I can remember. Since I was a kid, I don’t remember a time before gaming. I was born in ’93, and Pokémon Red came out in ’96 on the Game Boy, and that was one of my first video games growing up.

I also played all these games on Nintendo 64. I loved Diddy Kong Racing. I remember getting my butt kicked by my cousin when I was four or five years old and throwing a tantrum. So, I started grinding and grinding and eventually beat him.

What inspired you to start streaming?

I fell in love with Overwatch in the fall of 2016 and started climbing the competitive ladder during my break in Air Force training. Eventually, someone told me I was ranked No. 3 in the world for Hanzo. So, I kept pushing, and when I hit the No. 1 ranking, I made a video about my climb from gold to grandmaster and threw it up on YouTube. That video took off, and it made me realize the power of content creation.

When people in my YouTube comments section told me I should start streaming, I had no idea what they were talking about. Then I learned about Twitch and discovered guys lime summit1g and Dr DisRespect, and those guys inspired me to start streaming.

How do you juggle life in the Air Force with being a full-time streamer?

I must balance working 80 to 100 hours a week. I wake up sometimes as early as 3 a.m. to go to work, fly, or teach an eight-hour shift. Then I come home, eat dinner with my wife, drink a cup of coffee, and go straight into recording YouTube videos and streaming. I really don’t have any free time during the week.

But I’m lucky. My wife is the best teammate. She’s the unspoken, behind-the-scenes hero of this entire operation. She’s my manager – helps with contracts, deliverables, and makes sure everything is above board. None of this happens without her.

It takes a lot of dedication and discipline to make this work, but I know that if I do this right, when I leave the Air Force, I can give my wife – and our future family – the life they deserve. I love the Air Force, and I wanted to serve my country. And I feel like I’ve done that. But this is my dream, and I’m going to go after it with everything I’ve got.

You recently shared that you finished building the “content/gaming studio of your dreams.” What essentials did you need? Do you have any plans to continue adding to it?

For me, the whole purpose of building the studio was first impressions. There are literally thousands of people streaming the same game, so when someone comes into my stream, I want them to know that I care about my content, my community, and my craft.

I’ve got it kitted out with two 4K ASUS monitors, a 1440p 240 Hz monitor for my main gaming, and I’ve got a two PC setup. I also have SCUF controllers all over the place, really nice cameras, and a desk that’s built like a tank. In terms of performance and aesthetic, I am good to game for a long time with this setup.

What do you think of Warzone 2?

I’m really excited about it. I got the chance to play Warzone 2 at Call of Duty: Next, and there’s a lot they’re going to radically change about the game to where it legitimately feels like Warzone 2.0, not a new map.

Some things in the game are going to feel clunky, with new movement mechanics and new looting mechanics. Fortunately, having the SCUF in my hand helps. I don’t have to worry about playing double claw or reaching up on a midi pad. I can bind some of those buttons, the paddles, to help with that.

But my favorite thing about Warzone 2 is the new map, which is incredible. It's optimized very well. The visibility is incredible, and it's just beautiful. It plays out very, very well.

How did you get hooked up with SCUF?

I talked to them at TwitchCon about how much I liked the products, and SCUF sent me a controller to review. So, I started doing SCUF reviews – I thought I was going to be a tech review YouTuber. Then Warzone dropped, and I pushed forward with Warzone Academy, and the rest is history.

Tell us more about your exclusive SCUF design!

Contrary to my name, I hate the cold. I hate the cold more than anything. But I’ve always loved the blue aesthetic – that ice blue, that electric blue – and man does this color pop. I wanted the controller to pop on my hand cam, and the colors just look incredible. And it definitely fits the vibes I’ve built with the electric blue and the retro wave design.

All the content on my channel is about helping people improve and get better, and SCUF is one of the tools that I recommend for helping people hone their craft. That’s what this controller design is all about. It’s about the player using it in their journey to get better, not about me. The community I’ve built is very important to me – and this controller is for them.