DESTINY 2: Being A Guardian with your SCUF

Blurring the lines between the MMO, RPG and FPS, Bungie’s Destiny sent you through an elaborate space opera to save humanity from ruthless alien forces that want to see us extinct. And with the release of Destiny 2, the story gets bigger, the loot gets shinier, and the enemies get even more brutal.

In this game guide, we’ll be showing you how to get the most out of your SCUF controller when playing in the massive online world of Destiny 2. 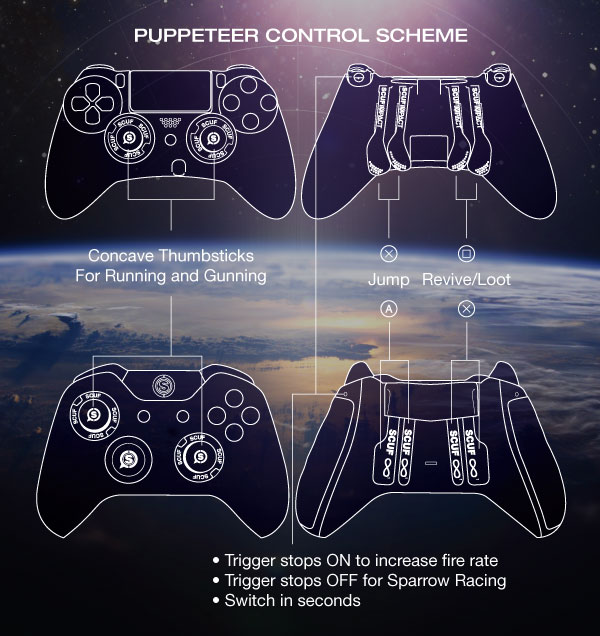 There is always a reason to keep an eye over your shoulder in the world of Destiny 2. Your foes aren’t above getting in a shot when you’re trying to loot ammo crates or even when you’re reviving a teammate.

In addition, map your right paddle to X (for the PS4) or A (for the Xbox One). Jumping and aiming in Destiny 2 can be quite difficult, but players who make use of abilities like Icarus will be very happy to have the ability to do both at once.

Trigger Stops: Single fire weapons only shoot as quickly as you can pull the trigger, and that’s where SCUF’s trigger stops come in. By activating these stops, a Guardian can put down more fire in a shorter amount of time, making that Scout Rifle even more deadly. And if you’re looking to hop on your Sparrow and cruise to the next zone, turning off your trigger stops takes seconds, and doesn’t require a game restart.

Thumbsticks: Thumbstick preference is a personal choice when compared to SCUF’s other customizable features. However, TeamSCUF prefers using regular concave thumbsticks for the ability to really dig in our thumbs when running and gunning. This is particularly effective in extended game sessions, where you’re more likely to lose that grip over time.

Subscribe to the official Scuf Gaming newsletter now and stay informed of all the news around our innovations, eSports, upcoming promotions and deals. 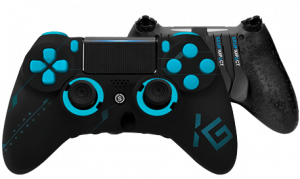