Over 90% of professional players and teams used SCUF controllers at the 2017 Call of Duty World League Championship, Presented by PlayStation 4 at the Amway Center in Orlando, FL, August 11-13.  As a primary sponsor at this year’s championship event, SCUF is pleased to congratulate one of our sponsored teams, OpTic Gaming, who were crowned champions of this year’s event. Many of the top players in the league are SCUF sponsored players including OpTic team members; Matt “FormaL” Piper (CWL 2017 MVP & 1st time CWL winner), Ian “Crimsix” Porter (2nd time CWL winner), Seth “Scump” Abner (1st time CWL winner) and Damon “Karma” Barlow (3rd time CWL winner). While SCUF controllers have become the de facto controllers for competitive gamers, they’re also used by a large number of enthusiast gamers.

"It's been a long road to champs and there's no better feeling than to finally claim the title. We are very grateful for all of our fans in the green wall and to partners like Scuf Gaming who have supported OpTic across multiple years," said Hector Rodriguez, Owner and CEO, OpTic Gaming. 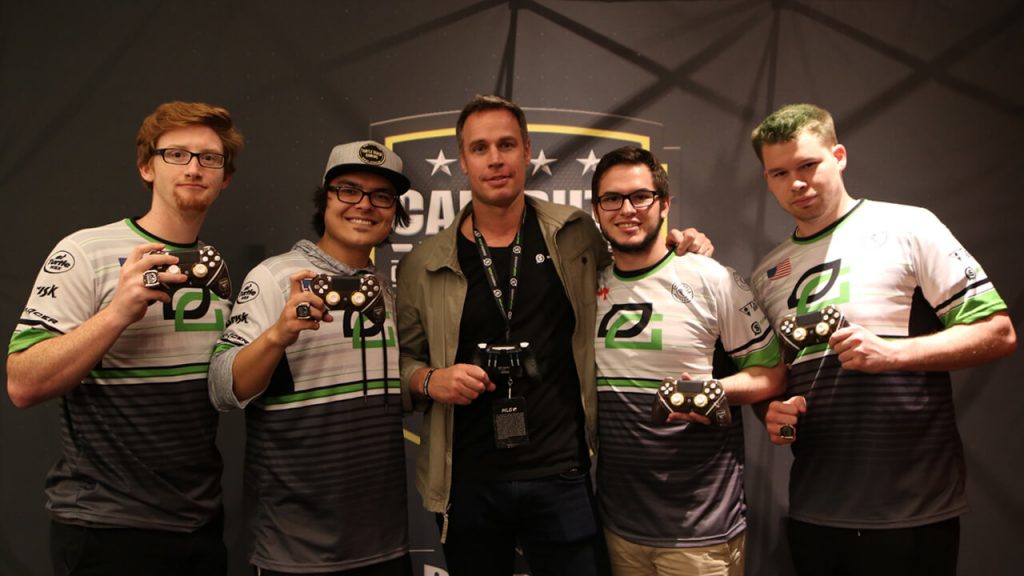 Since its inception, SCUF has been a key part of the Call of Duty (COD) ecosystem, from professional players and teams, to leagues and enthusiasts. By inventing and patenting new technology and functionality (over 30 granted patents), SCUF controllers enable players to utilize more of their hand in a safe and ergonomic way, while potentially increasing performance. Scuf Gaming created a new market space in 2011 for professional gaming controllers and have continued to be an authentic and natural fit for MLG and Activision’s CWL.

Kevin Flynn, Director, Call of Duty Esports, “We see our collaboration with Scuf Gaming as a natural fit and great opportunity to continue to push esports forward. We have consistently seen many CWL players and teams rely on their SCUF controllers in the heat of battle. We're excited to continue our partnership.”

A SCUF controller is designed to make a significant difference when playing competitively. The paddle control system on the back of the controller allows players to perform advanced moves like jumping, crouching, melee or reloading while keeping their thumbs on the thumbsticks. The trigger control system saves game-changing milliseconds when aiming and shooting. The interchangeable thumbstick control area and the SCUF military grade grip improve comfort and accuracy and like every SCUF innovation, they are fully customizable to match every individual's style.

To support the lead-up to the finals, SCUF launched the #OurTimeIsNow campaign celebrating Call of Duty’s biggest esports event of the year. Esports enthusiasts and fans got in on the action by posting their own #OurTimeIsNow images on social media from the SCUF booth. SCUF fans also had the opportunity to meet SCUF sponsored teams at the SCUF signing booth throughout the weekend.

Duncan Ironmonger, CEO & Founder of Scuf Gaming said, “We are excited to see the continued growth of the competitive community and for SCUF to be such an integral part of its success. The passion of gamers from hobby enthusiasts to elite professional players is evidence that Esports is here to stay.”

Scuf Gaming®, global leader and innovator of gaming peripherals and winner of eSports Industry Awards for “Best Hardware” in 2016, provides tactical gear for elite gamers where over 90% of the top professional gamers in the world use SCUF. Selling high-end accessories and competitive gaming controllers for console and PC, SCUF offers a number of functional and design features custom built to increase hand use and improve gameplay. Built to specification, SCUF controllers cater to competitive and casual gamers who recognize that one size does not fit all. The SCUF controller has features, which are covered by 30 granted patents, and another 65 pending; protecting 3 key areas of a controller; back control functions and handles, trigger control mechanisms and interchangeable thumbstick control area.  For additional information about Scuf Gaming, please visit www.scufgaming.com.