The big talking point this week has, of course, been the release of Infinite Warfare. With roster mania already in full force, it’s no surprise that player transfers continue to dominate the eSports airwaves. This week’s article is dedicated to the latest from the Call of Duty community, as the eSports scene ushers in a new era of competition. Here are our top stories from the last week.

With the Call of Duty Infinite Warfare season edging ever closer, Activision unveiled their first official rule set of the new title. The rules include minimal weapon and Perk restrictions, while the developers continue to look at what does and doesn’t work in a competitive environment.

Former pros have been said to have consulted on the first draft of the rule set, which Activision aims at being “entertaining, accessible, and most importantly, competitive.” You can find the full set of rules on the following here.

Following his exit from Luminosity, fan favorite Nameless took to Twitter to announce his new roster. The team, currently without an organization to represent, includes Study, Havok and former Elevate man, Nagafen. The roster sees Nameless and Studyy continue their collaborative efforts after a solid year as part of the Luminosity franchise. Nagafen subsequently left Elevate to complete the roster.

With 75% of their team heading to Luminosity, Rise and Loony were left to rebuild their roster ahead of the Infinite Warfare season. Elevate wrapped their year in convincing style, finishing 3 rd at Call of Duty Champs, but surprisingly Nagafen opted to depart the line up to link up with Nameless and his new roster. This week it was confirmed that Rise deemed the three remaining Elevate players to be the perfect replacements for Octane, Slacked and Classic, as Aqua, Faccento and Falony headed to Rise Nation to kick off the new season. After a successful season on BO3, this now leaves Elevate without a roster for Infinite Warfare, while Rise will kick off a new chapter in their history. 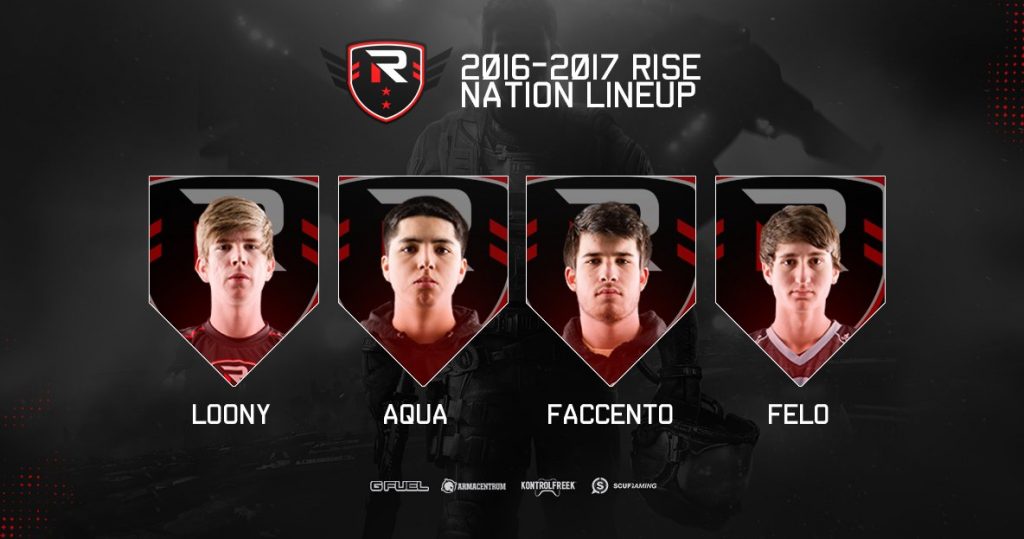 Killa Will Not Retire

Despite announcements to the contrary, it appears that former World Champion Killa is set to continue competing into Infinite Warfare. Killa is set to line up alongside long time team mate and close friend, MiRx, who’ll be joined by Maux and Whea7s to complete their new foursome ahead of Infinite Warfare. Like Nameless’s new roster, the team is without representation coming into the new season.

Since our last article, several more teams announced they’d made movements in the transfer market. Proofy returns alongside Twizz, Sinful and Nelson in what looks to be a promising mix of young and veteran talent. Over in Europe and Dutch star Torres has joined forces with ex-Hypergames man Brainn, Momentus and Wuskinz in what could be a promising pan-European outfit. Blfire, Miyagi, Examples and Johnny also announced their decision to team, with Examples and Johnny reuniting for the first time since their ill-fated 100Thieves campaign in Stage 2 last season.