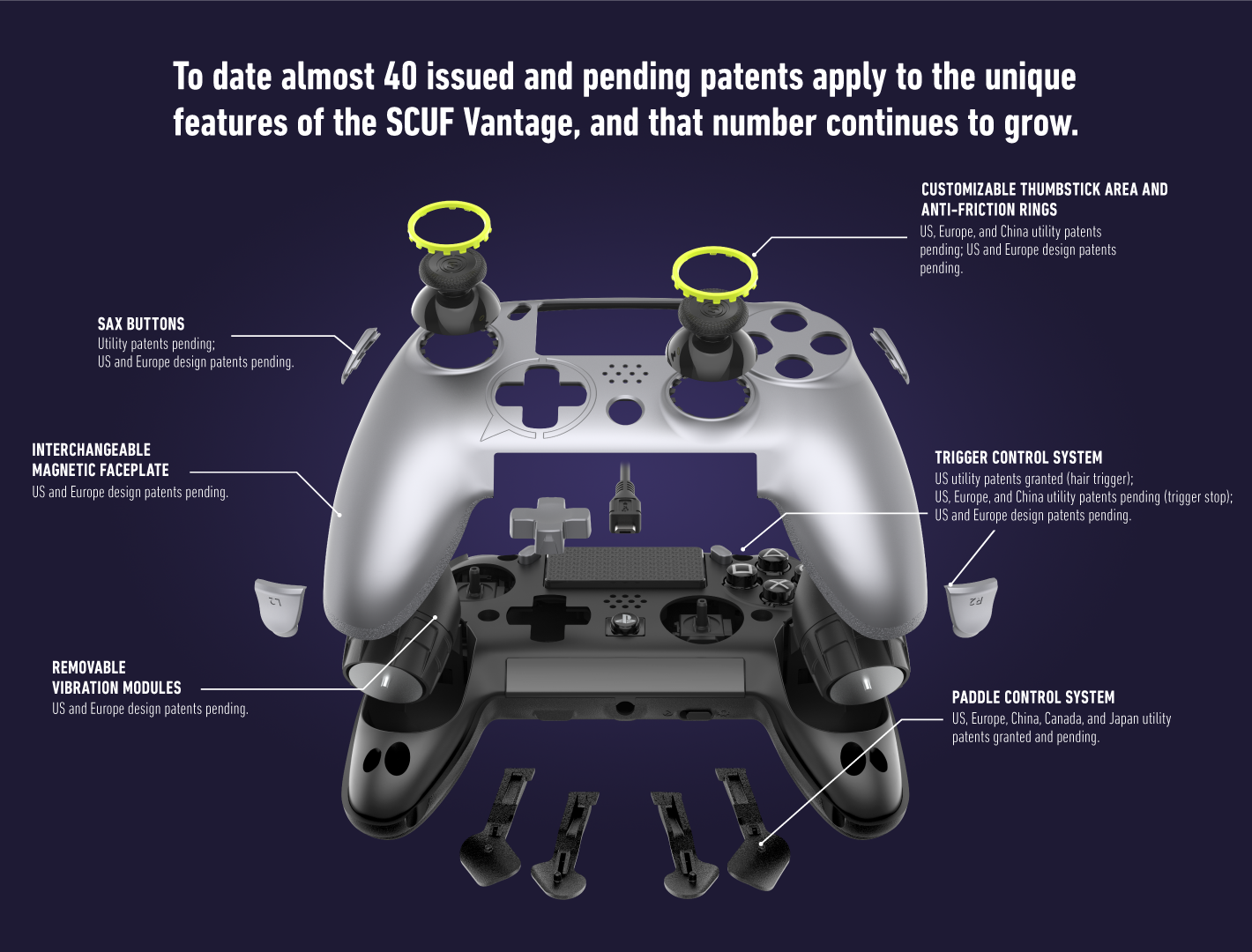 ATLANTA, November 5, 2018 — Scuf Gaming®, innovator and creator of high-performance gaming controllers, through its patent subsidiary Ironburg Inventions, has expanded its global patent portfolio, bringing the company’s total number of patents to 45, with an additional 5 pending patent applications approved and ready to issue, and 52 additional pending applications.

“We’ve known our controller features would become essential for competitive players since creating the market category for performance controllers in 2011,” said Duncan Ironmonger, CEO and Co-Founder of Scuf Gaming®. “Since then, we have invested heavily in our IP portfolio, while educating and supporting the professional gaming community when few people knew esports existed. These patented innovations have benefitted hundreds of thousands of gamers, not just professionals, because our controllers enable them to use more of their hands during gameplay and reduce hand-strain through improved ergonomics.”

The SCUF Vantage™, the company’s most recent and advanced PS4™ controller, relies on existing Scuf Gaming® intellectual property, such as remappable back control functions, interchangeable thumbsticks and trigger control mechanisms. It also features innovations never before seen in a controller, such as the Sax™ buttons (removable side action buttons), which permit mid-finger activation of game functions and removable vibration modules to quickly select vibration and weight preferences. The SCUF Vantage™ has almost 40 granted or pending patents covering its unique features, and that number continues to grow.

Scuf Gaming® continues to obtain intellectual property protection for the features that increase user hand use and enhance performance through the customization of thumbsticks, triggers, and buttons as well as the look and feel of its controllers.

For example, four of the most recently granted patents extend geographic and functional coverage, to include:


“Intellectual property sits at the heart of our company and protects our ability to innovate, test, and perfect our products,” continued Ironmonger. “Our most advanced controller, the Vantage, is built off our experiences with previous generations of SCUF controllers and our drive to create feature-rich, professional-level input devices that ultimately close the gap between controller and keyboard and mouse. In fact, top gamers, like Nickmercs, regularly best keyboard and mouse players during cross-platform Fortnite competitions thanks to SCUF controllers.”

In 2015, Scuf Gaming licensed their IP to Microsoft to create the Xbox Elite controller. Scuf Gaming continues to invest many millions of dollars into R&D and their patent portfolio, and actively defends their intellectual property to protect their assets and many employees worldwide.

Scuf Gaming®, innovator and creator of high-performance gaming controllers, provides superior accessories and customized gaming controllers for console and PC that are used by top professional gamers as well as casual gamers. Built to specification, SCUF controllers offer a number of functional and design features custom built to increase hand use and improve gameplay. SCUF controller features are covered by 45 granted patents, and another 57 pending, focusing on four key areas of a controller: the back control functions and handles, the trigger control mechanisms, the thumbstick control area and the side-mounted configurable Sax™ button placements.