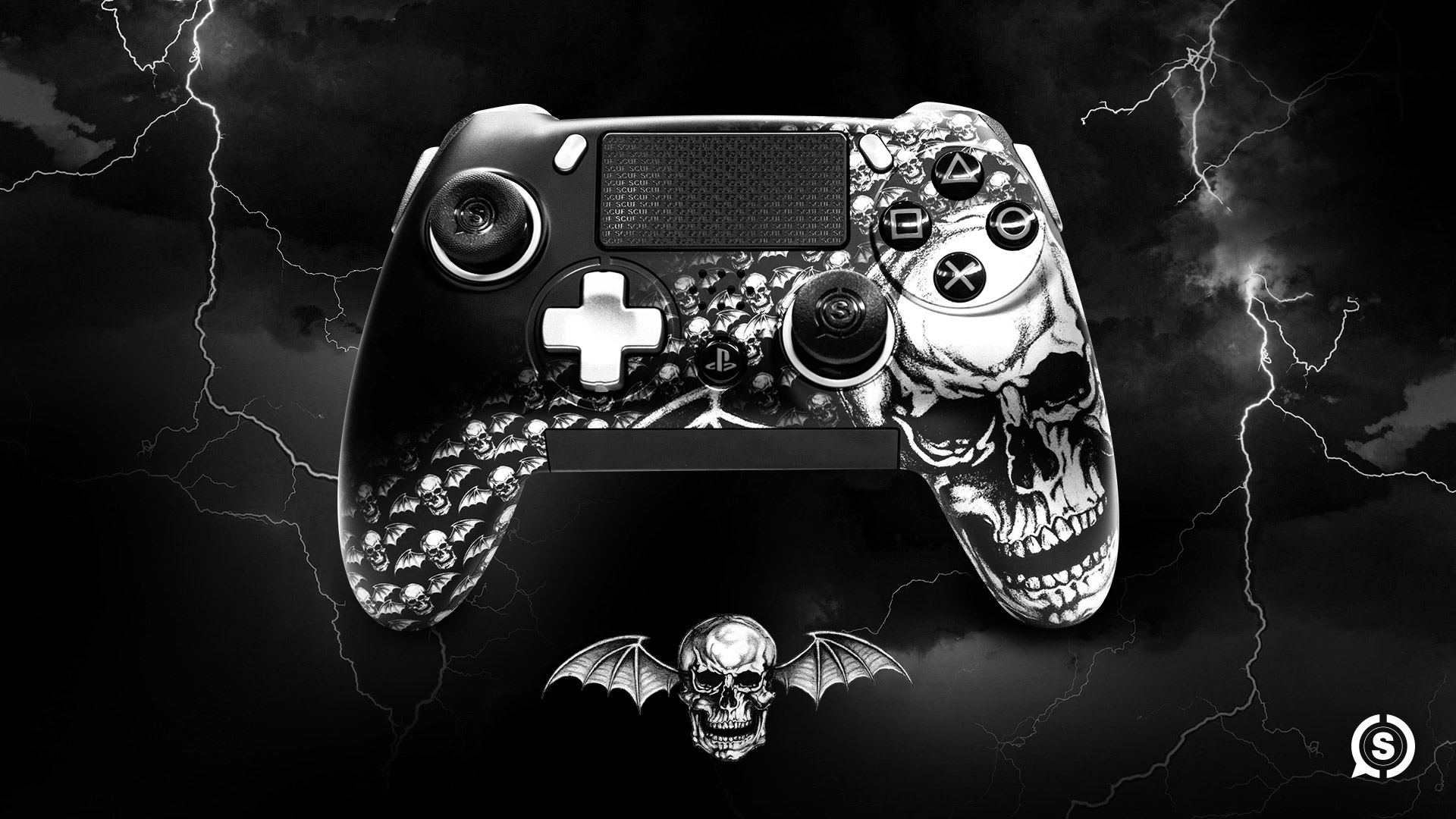 ATLANTA, November 02, 2018 — Scuf Gaming, innovator and creator of high-performance gaming controllers continues its partnership with American rock band Avenged Sevenfold and releases the SCUF Vantage Avenged. The controller features iconic designs from the band’s globally recognized artwork, and continues Scuf’s multi-year collaboration with the acclaimed musicians and gamers. Music from the Grammy-nominated heavy metal band Avenged Sevenfold —whose first SCUF controller design debuted in 2013— has had their music featured in each of the four installments of Call of Duty: Black Ops, all of which has been collected in the EP “Black Reign”, available now. Lead vocalist M. Shadows is an avid Call of Duty® player and has been using SCUF controllers since early 2012.

Shadows says, “We are super excited to share a new Avenged design for SCUF controllers and continue our partnership with SCUF. With our new song “Mad Hatter” featured in this year’s Call of Duty: Black Ops 4, we are thrilled to now give our fans the edge in-game with the great features of the SCUF Vantage Avenged for PS4.”

“This new controller embodies the increasing interplay between the gaming and entertainment worlds in an authentic way,” said Duncan Ironmonger, CEO and Co-Founder of Scuf Gaming. “We’re delighted to extend our close partnership with M. Shadows and Avenged Sevenfold. The response from their community through the years has been amazing and we are excited to offer their fans a new design that represents the brand so well.”

Scuf Gaming®, innovator and creator of high-performance gaming controllers, provides superior accessories and customized gaming controllers for console and PC that are used by top professional gamers as well as casual gamers. Built to specification, SCUF controllers offer a number of functional and design features custom built to increase hand use and improve gameplay. SCUF controller features are covered by 42 granted patents, and another 60+ pending, protecting four key areas of a controller: the back control functions and handles, the trigger control mechanisms, the thumbstick control area and the side-mounted configurable Sax button placements.

Avenged Sevenfold became one of the world’s biggest rock bands by creating a sound that broke through obstacles of language, distance and culture. They raised the stakes and standards for the genre with a string of blockbuster albums, including their 2005 platinum-selling breakthrough, City Of Evil, 2007’s platinum-selling Avenged Sevenfold and two consecutive No. 1’s on Billboard’s Top 200 Albums chart: 2010’s Nightmare and 2013’s Hail To The King. They’ve achieved Diamond, Platinum and Gold awards for album sales in nearly a dozen countries, racked up over a billion video views and a billion-plus Spotify streams, have consistently been one of the most-played bands on rock radio for over a decade with multiple No. 1 singles, and have headlined arenas and the biggest rock festivals around the globe, amassing a diehard international fan base whose members number in the millions. Their most recent release, The Stage, is a work of immense scope and ambition tied together by an Artificial Intelligence theme. Inspired by the writings of Carl Sagan and Elon Musk, the album is the band’s first thematic release and its epic 15-minute-plus closing track, “Exist,” features a guest appearance by award-winning astrophysicist Neil deGrasse Tyson giving a spoken word performance he penned specifically for the album. The album hit No. 1 on Billboard’s Rock, Hard Rock and Alternative Albums charts and drew praise from a plethora of outlets, among them Rolling Stone, NME, Q, The Guardian, Guitar World, Metal Hammer, Revolver, Loudwire, Metal Injection, Alternative Press, Drum, Total Guitar and Classic Rock, with the latter calling it “a metal masterpiece.” The album’s title track earned the band their first-ever Grammy nomination for “Best Rock Song.”